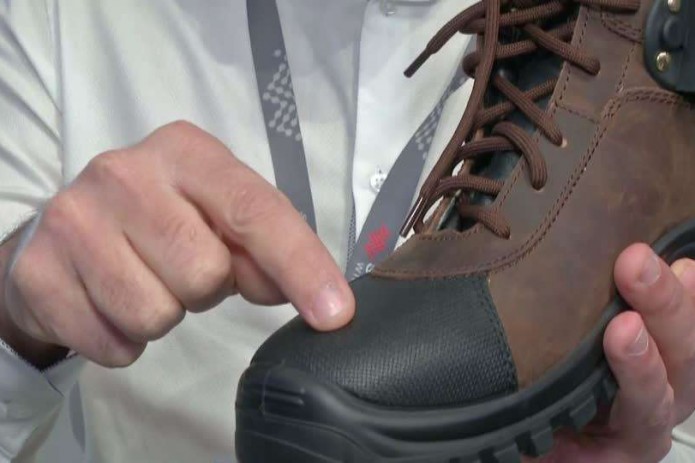 Boots that let you send text messages with your feet were unveiled at Mobile World Congress in Barcelona last week. Designed to improve worker safety in remote, dangerous or noisy workplaces, Intellinium's smart safety shoes feature built-in telecommunications that can send and receive alerts or write short text messages without using your hands.

Using a simple Morse code-inspired series of dots and dashes, wearers can squeeze a button on the side of the shoe to write and send a message or acknowledge an incoming text. Embedded in the toe-cap of the shoe, however, is a sensor that allows the wearer to perform the same function hands-free.

Tapping your big toe against the top of the toe-cap makes dots and dashes that translate to a number of predefined messages.

"We made some things simpler meaning that with a dash and dot you can send an SOS mayday. So for instance, to send an alert it's two seconds you press and it's a dash. You release. You press again to confirm and there the alert is sent outside," added Destrian.

The shoe has other safety features too, like sending a "mayday" alert in case of injury.

"If you are unconscious, if you don't move for instance, the shoe can detect that you do not move any more. It will try to wake up you with vibration here. If you do not answer with vibration then a signal will be sent out to other colleagues close to your place or to your employer."

Built-in sensors detect falls or shocks, and immediately alert the employer or a colleague of the worker's location to enable faster response.

Intellinium, based in France, has partnered with communications company Sierra Wireless to provide multi-operator coverage for their smart shoes.

"The type of message that we are sending is very simple, so based on a kind of Morse code. So it has a smaller throughput, so very light information. So we have a long lasting battery from one month to three months," said Sierra's Jean-Francois Pinson.

Destrian added: "In Europe we cover 100-percent of all European telecom operators, which brings better penetration in buildings and better coverage."

He added they're now working to refine and test their smart shoe in a number of industries, including construction sites, factories, mines and oil platforms.